The Chairman of the NCGOP is accountable to rank and file Republicans for several things:

Recent NCGOP leaders have not performed the above five imperatives.

Results Matter. The results of the 2016 and 2018 election cycles are, by themselves, grounds for an immediate change in party leadership.  They are accountable for losing three of the four most pivotal races on the ballot in 2016- the Governor’s race, the Attorney General’s race, and the NC Supreme Court Associate Justice race.  Losing those three positions assured our legislature would be neutralized in the courts and by executive branch recalcitrance for the following four years. These results have slowed the growth of our economy, delayed the reduction of cumbersome regulations, and stymied initiatives protecting traditional American values.  The disaster of the 2018 mid-term elections compounded those 2016 failures. We lost all state governance leverage when we lost our legislative super-majority. We lost another very winnable Associate Justice race in 2018 putting us in danger of losing every Supreme Court seat (in 2020) for the first time in the modern era.  In March 2019, we will be in the minority on the Appeals Court as well, because of our mishandling of those races in 2018.

These losses are nothing short of a travesty. Yet, we need not have suffered the defeats; all the races could have been won had our leadership been more resourceful, vigilant, and supportive of grass roots initiatives and had they worked effectively as political advisors to our elected public leaders.  If President Trump had not been so influential in getting North Carolina’s conservative unaffiliated voters to register and vote Republican, we might have lost even more winnable races that were closely contested in 2016. Several of our council of state races were decided by the coattail effects of our newly elected President who brought 80,000 new registered Republicans into the party between July and November 2016, new registrants who voted for our down ballot candidates. We cannot rely exclusively on President Trump’s coattails in 2020. The NCGOP will have to out-perform the Democrats for our Republican candidates to win going forward.

If we want the North Carolina Republican Party to be successful in growing and winning future elections we have to elect a new Chairman who will change the way we’re doing business. We must move past the notion that elections are won exclusively by securing large contributions, compelling us to elect the Chairman candidate with the biggest rolodex of back-slapping buddies.  No, if we are to win important future elections, we need a strategic-thinking Chairman with strong business acumen.  We need a Chairman with the motivation, drive and natural leadership skills to re-energize the base and bring new registrants into the party.  And in the end, we must hold the new Chairman accountable for achieving results.

Someone once said: “behind every great man, you will find a great woman”.  Sometimes, the great woman is beside him.

I am not alone in thinking that Jim Womack is a great man, and I recently had the pleasure of meeting the great woman beside him. 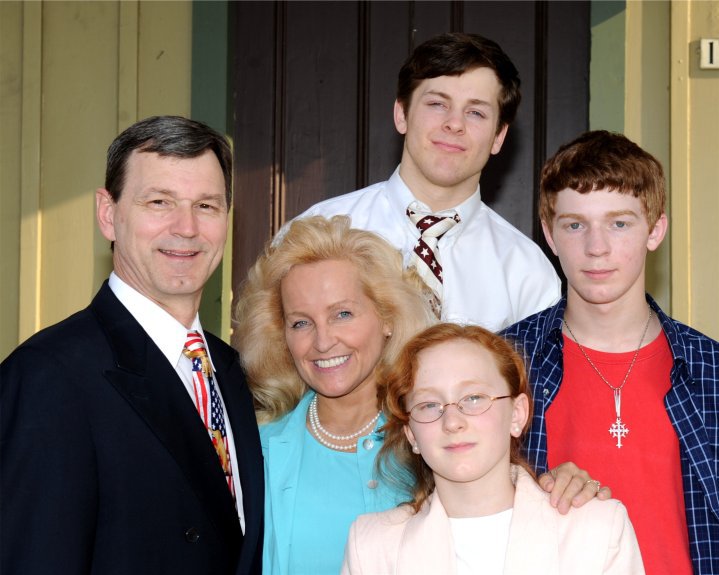 Lt. Col. Sherry-Lynn Womack, United States Army (Retired) is a truly impressive woman.  She is a tiny little package of dynamite!  Like her husband Jim, her post-Army activities include public service.  She currently serves on the Lee County NC School Board.

I could sit here and write all evening about this remarkable woman, but the videos shown below might tell you more.

A TV news feature on Sherry-Lynn:

Sherry-Lynn sings at her retirement celebration:
(this one cannot be embedded in this page, you’ll have to click the link below)
https://youtu.be/xL1r_GN62mU

After writing this article, I discovered another gem among Sherry-Lynn’s YouTube videos.  Listen to beautiful voices singing Amazing Grace, and read her comment below explaining why she requested this hymn be sung at her retirement ceremony.

With combat tours in both Afghanistan and Iraq there is no doubt that I believe in God’s “Amazing Grace” so it should come as no surprise that this song would be requested as I wanted to remember my friends who were not able to attend and made the ultimate sacrifice to our Country. Brian, Justin, Jamie, Dan, Chuck and Mike I will NEVER forget you… NEVER!