Make no mistake, we are at war. Emboldened by their victory in last year’s NC Supreme Court and legislative races, the democrat party is once again making plans to reestablish its political dominion over North Carolina in the fall of 2020. 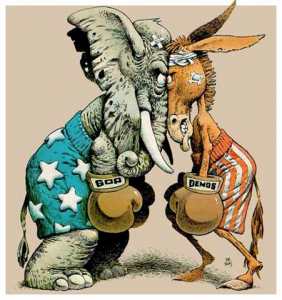 Liberal and progressive operatives are already at work undermining the North Carolina General Assembly, challenging nearly every Republican initiative in the state and federal court systems. The democrats have hired agitators who roam from venue to venue seeking to disrupt conservative groups and political events, knowing the traditional media outlets will provide ample coverage of their negative messaging.

This is no time for the NCGOP to be divided internally or to be dormant as the party controlling the legislature and most local jurisdictions. To the contrary, this is the time for action!  Two special Congressional elections and important municipal elections are coming later this year, and filing for the 2020 election cycle will be upon us in December.

This is the time to bring new voters into the party- citizens from minority populations and younger voters, now coming of age. We need to be recruiting strong conservative candidates to run for local and state-level offices. We need to be organizing new county, judicial, and congressional district jurisdictions for future success. We should be actively engaging in voter outreach, especially in the minority populations. By using the right tools and automation, our volunteers can make major strides toward winning all major races in 2020 and beyond.

As a former field grade Cavalry officer in the U.S. Army, I know how to organize for combat and how to lead troops from the front. As the next NCGOP leader, I will quickly organize and equip our great District, County, and Precinct talent for battle with our democrat opposition. We will campaign on all fronts– in the media, in government circles, and especially in the trenches –where we will encounter the most ardent socialists and anarchists. We will prevail!

This is the time to build up our recent grass roots efforts to re-establish a conservative super-majority in the NC General Assembly.  We must sustain NCGA conservative dominance, and begin executing now to win back the Governor’s mansion in 2020, along with all the council of state positions. We must begin the deliberate planning now to win important races in the Appeals and Supreme Courts in 2020, and to win back the NC Supreme Court at our first opportunity in 2022.