The North Carolina Republican Party has 2,046,747 members registered to vote, a deficit of 592,490 to the democrats. We need to eliminate this gap over the next four years. Given our citizens’ reverence for liberty, Judeo-Christian tenets, and traditional American values, North Carolina should be a “red state” for all intents and purposes. We not only “lean” right, we are right.

For much too long, our party’s leadership has ignored the problem with the voter gap between us and the democrats. North Carolina is branded by national media outlets as a “light blue state’ or as a “swing state.” These labels affect voting behaviors among what Rush refers to as “low information voters.” Our voter registration deficit reflects the influence of identity politics as well. 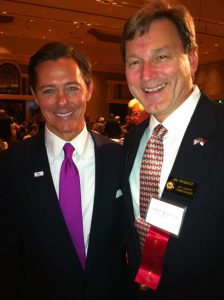 Our opponents claim minority groups as their natural affiliates; despite the fact the Republican Party Platform best reflects their ideals- a Christian belief system, marriage between a man and a woman, a traditional family constellation, support for Israel, textual interpretation of our Constitution, and limitations to the size and scope of our federal government. Frankly, most American citizens (and many North Carolinians) are woefully misinformed about the parties and what each stands for.

As NCGOP Chairman, I will champion the cause to eliminate our registration deficit. For the next four years, we will out-work our democrat counterparts in educating prospective voters about our principles and values. We will empower our counties and precincts with the automation, tools, and training they need to market our party to the uninformed.  Below is one such tool, insprired by Franklin Graham, that I developed for broad distribution around the state.

We will win over a quarter million conservative democrats and unaffiliated voters for the Republican Party and we will register hundreds of thousands of new Republican voters newly arriving into the state or registering for the first time. By the 2020 election, Republicans will outnumber democrats in the Old North State!